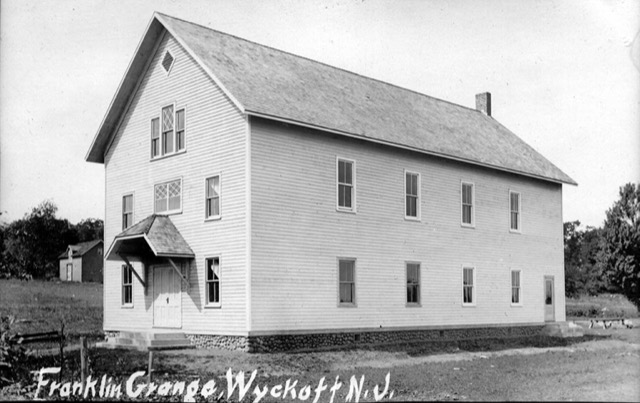 Built in 1913, the Grange building (above) was constructed for the Wyckoff Grange chapter, which was formed in 1903 for local farmers to fight the farmer’s market relocation in Paterson and to act as a common voice for local farmers. As farming waned in the third quarter of the 20th century, Grange membership diminished, and the building was converted to a private residence in 1970.

Franklin Grange No. 130 was part of a national social organization in the United States. Officially named The National Grange of the Order of Patrons of Husbandry, the Grange was founded after the Civil War in 1867, it is the oldest American agricultural advocacy group with a national scope. The Grange actively lobbied state legislatures and Congress for political goals, such as the Granger Laws to lower rates charged by railroads, and rural free mail delivery by the Post Office. When the Grange first began, it borrowed some of its rituals and symbols from Freemasonry, including oaths and secret meetings and special passwords necessary to keep railroad spies out of their meetings.
As a non-partisan organization, the Grange supports only policies, never political parties or candidates. Although the Grange was founded to serve the interests of farmers, because of the shrinking farm population the Grange has begun to broaden its range to include a wide variety of issues, and anyone is welcome to join the Grange.

The Grange is headquartered in Washington, D.C., in a building built by the organization in 1960. Many rural communities in the United States still have a Grange Hall and local Granges still serve as a center of rural life for many farming communities. There are currently 25 active Grange chapters in New Jersey.

The Grange Hall and the Mural

This is the large mural that was hung at the old Grange. It is a collage of local businessIn Wyckoff’s early days, farms were sprinkled throughout the area from modern-day Lawlins Road to Ravine Avenue. Originally sold from 18 cents to $1.75 an acre, farms in this area boasted such crops as apples, raspberries, squashes and beans, plus livestock like pigs, poultry, sheep and dairy cows. Local streams and brooks were dotted with gristmills, sawmills and cider mills. Farming was an integral part of life in this area throughout the 18th, 19th and early 20th centuries.
By 1903, local farmers were transporting their crops to the Hackensack/River Edge area for resale in Manhattan; later, Paterson became a viable market as well. When the farmers’ market was relocated in Paterson, Wyckoff farmers objected, and Franklin Grange 130, the first Grange in Bergen County was formed to act as a common voice to fight this move. In 1913, the Grange Hall was constructed on the corner of Fairview Place and Franklin Avenue to house the Wyckoff Grange Chapter. Used for many years by many local organizations for get-togethers and meetings, as well as for round and square dances, the Grange was the center of community activities for nearly 50 years. But as farming waned in the third quarter of the 20th century, Grange membership diminished, and the building was converted to a private residence in 1970.
Several years ago, a long-lost treasure of the Grange resurfaced. The large mural that once graced the main gathering room in the old Grange was discovered in storage. Bearing the names of early Wyckoff businesses, the mural reflects the many local organizations that once met in the Grange. Truly, it is an important document of Wyckoff history. It awaits a permanent home.es and was recently discovered in storage by the Wyckoff Historical Society. The society is currently seeking a permanent location in Wyckoff to exhibit the one-of-a-kind mural.