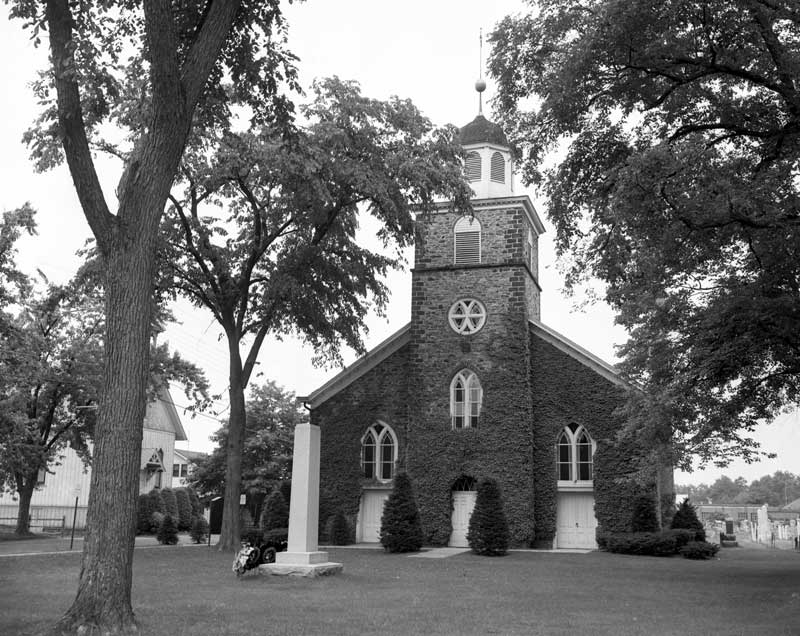 Local Dutch settlers attended the Ponds Dutch Reformed Church, which was built in 1710. When the congregation grew large enough, land was bought from Aaron Ackerman and Albert Van Vorhees for $7.50 and a church was built in 1806. The rectangular stones making up portions of the church were quarried from Red Mills Quarry in the Arcola area of what is now Paramus. The local farmers would take their load of produce to the market in Hoboken and return home with stones. The church members bought their own pews with donations ranging from $8 to $82. In this photo, c 1910, the Quackenbush water tower is in the left distance. The tower served the needs of several families and was destroyed by fire in 1926. The old Wyckoff Public School is in the right distance. In 1867 the church was renamed Wyckoff Reformed Church.

A war memorial was erected in 1928 in front of the Wyckoff Reformed Church to the residents who served in World War I. Later, names were added for those who died in World War II, Korea, and Viet Nam. The original bronze plaque is in the town hall, and the monument was engraved to reflect all wars through Viet Nam. Many of the names have been used to name streets in Wyckoff. It is the focal point of the Memorial Day parade each year.