The Wyckoff Historical Society was formed in January 1974 by three Wyckoff couples. Bylaws and a charter were drawn up and meetings were held at residents’ homes. The first public meeting was held June 29. The Society was incorporated on December 13, 1974.

Today, the Wyckoff Historical Society still abides by its original mission to research, preserve and educate about the rich history of Wyckoff, New Jersey. Our general meetings/programs are held on the third Tuesday of every month at the Wyckoff Public Library at 7 pm.

We invite you to take a trip into the past when Wyckoff was farmland, mills, and pastures. Read about the early settlers who built the stone houses, churches, schools and businesses that formed Wyckoff. Although most of the farms and pastures are gone, many historic homes remain, tended carefully by current owners, and giving you a peak into Wyckoff’s history. The next time you drive around Wyckoff, drive a bit slower, and remember Wyckoff’s past. 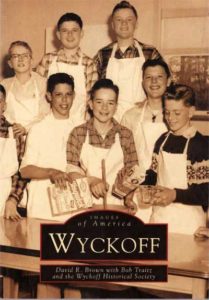 Book Cover Photo: Members of the Chef’s Club at the Abraham Lincoln School, 1957

To use a photograph from this book or the WHS archives, please read the WHS Image Usage Agreement.